Despite the adverse weather conditions, approximately 20 cyclists set off on Friday 10th June from Albert Dock in Liverpool, rode over the Pennines on Saturday 11th and finished in Hull for a celebration event and Hog Roast on Sunday 12th.  The Challenge was for each cyclist to raise £500 each towards training and mentoring young people via Cat Zero programmes.   The total raised so far is just over £8,000.

Huge congratulations to everyone who took part and those in support.

If you would like to make a donation towards this, please click on the link below http://uk.virginmoneygiving.com/charity-web/charity/displayCharityCampaignPage.action?charityCampaignUrl=catzero16.org

For more information about the work of Cat Zero, please click here.

Congratulations to Paul Hodgson of Market Weighton who has driven off in a brand new Smart car thanks to the Daisy Appeal’s recent funding raising raffle. 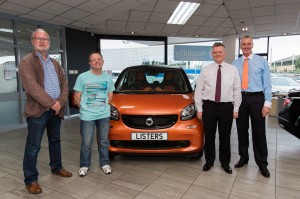 The WA Horncastle Charitable Settlement donated the car to the Daisy Appeal, which was supplied by Listers Mercedes-Benz and Smart on Saxon Way in Hull at a reduced cost.

The Smart car then toured the region raising awareness of the charity which is raising funds for a PET-CT scanning unit at Castle Hill Hospital.

Mr Hodgson, who works at Tesco in Market Weighton, bought his ticket at Beverley Races in June.  He said he decided to chance his luck because he always liked to support charities involved in the fight against cancer: “My nephew was diagnosed with leukaemia when he was four, which was devastating, but thankfully he will turn 18 soon so there has been a happy ending…but other members of my family have been affected too, so I always like to give to charity.  Plus the Daisy Appeal helps local people and it is always important to support charities that do that.”

Professor Nick Stafford, founder of the Daisy Appeal, said he was delighted the car had been won by someone who appreciated what the charity was trying to achieve.

He said: “Paul entered the raffle for all the right reasons, to help us find ways to diagnose cancer, heart disease and dementia earlier for people in Hull, East Yorkshire and North Lincolnshire, and by doing so improve the health outcomes for thousands of people across the region. His story of being touched by these dreadful conditions is one we hear time and again and I am pleased that his generosity has led to him winning the car.”

David Colbeck, dealership principal of Listers Mercedes Benz in Hull, said the business had been only too pleased to help the Daisy Appeal.

Mr Colbeck said: “The Daisy Appeal carries out vital fund raising that is having a direct and positive effect on the health of people across the region. When they asked for our help in relation to the raffle, we jumped at the chance to get involved.”

Andrew Horncastle is a trustee of the Daisy Appeal and manages the WA Horncastle Charitable Trust.

He said the raffle had raised around £7,000 for the charity, which would go towards purchasing state-of-the-art medical diagnostic equipment.

“Our family trust donates money to a number of charities both locally and internationally and the Daisy Appeal is one of the most important of them,” Mr Horncastle said.

“It is a source of great satisfaction to see the raffle generate a significant sum for the charity, which will ultimately go to helping local people.  Thank you to everyone who bought a ticket.”

For more information on the Daisy Appeal go to www.daisyappeal.org

A  Horncastle programme in Partnership with Cat Zero to motivate young people in the age range of 16 to 24.

If there is not employment, there is self-employment.

Participation in sport and further training will be encouraged. Links with the youth of the third World will also be supported to raise awareness and also concern for others.

For more information about Cat Zero, you can visit their site by clicking here. 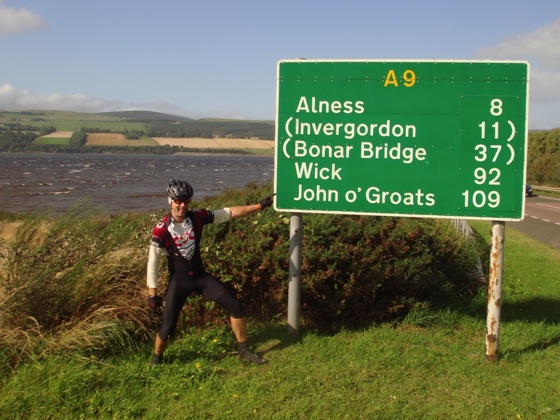 On 8 September 10 riders including our Trustee Andrew Horncastle set off from Lands’ End to ride to John O’Groats in memory of Ben Madden a cyclist who was killed in an accident last year and to raise money for the Daisy Appeal, after nine days riding, nine hundred miles and having climbed more than 47 thousand feet the ride was completed.

Andrew said ‘this was a tough ride but a fantastic experience and one I am pleased to have participated in, and also being a trustee of Daisy we are delighted to have raised a substantial sum of money’

At a cost of £6.6m the charity is to begin construction of a new PET-CT centre at Castle Hill Hospital in October, the new centre when completed late next year will be used for both clinical service and research in to cancer, coronary and neurological illnesses, capable of carrying out more than 3000 scans per year. Experience confirms that early accurate diagnosis of these illnesses leads to the best patient outcomes, the centre is being built by local people for local people.